Mirzapur Season 2 is nearing its release! Oh the desi nostalgia and excitement that surrounds this news! Recently, Actress Shweta Tripathi shared pictures from the dubbing sessions which rekindled the fire of curiosity among the Mirzapur fans. She also hinted that Mirzapur Season 2 will very soon hit the small screen.

We have gathered all the important stuff that you need to know. But first, let’s get the dust cleared from what happened earlier….

Mirzapur is an Amazon Prime Original crime thriller series.Season one followed the story of two young brothers Guddu and Bablu Pandit. Guddu and Bablu get entangled in the notorious world of drug mafias by joining hands with Mirzapur’s top drug mafia Akhandnath Tripathi.

But by joining hands with one gangster they automatically become an eye-sore to others. They rise in ranks under Tripathi and start a large scale illegal business of armaments. There are plenty of power hungry, yet useless, characters in the show which includes frequent gun fights.

Season one ended with a deadly gun fight killing some of the major characters. Mirzapur season 2 will be all about revenge.

The actress shared a series of pictures on her Instagram handle giving a glimpse of her dubbing session amid lockdown. In the pictures, the actress who portrays the character of Gajgamini Gupta aka Golu can be seen sitting in a recording studio, bright and beaming, with the script of the film. Her excitement was evident from the caption that read:

It informed that the actress is working in the midst of this harrowing lockdown to deliver the much-awaited show to the audience.

Apart from herself, the actress also shared the pics of some of her co-stars dubbing in the studio.  Actor Divyendu V Sharmaa who plays the role of Munna Bhaiya can also be seen posing with his script in the studio. While captioning the Instagram story, Shweta wrote, “Mirzapur 2, dubbing diaries, lockdown stories.” 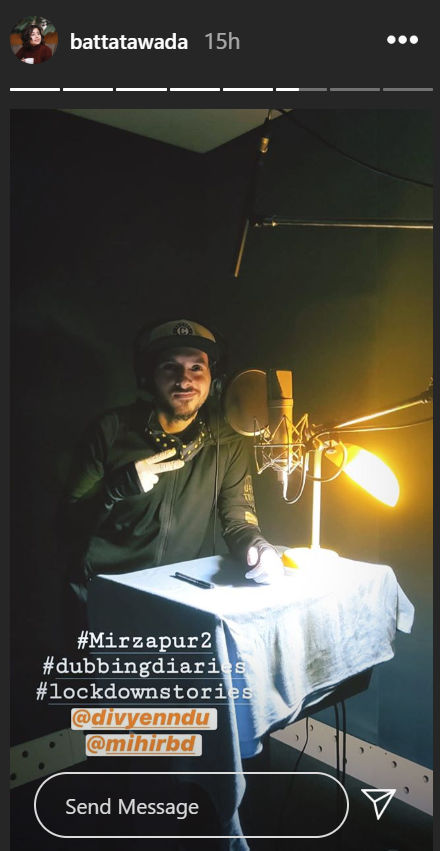 The second installment of the mafia and gunshot show was shown the green signal in February 2020. After the initial assigned date of 25 November 2020 fell under suspicion due the coronavirus pandemic, Amazon Prime announced a new date for the show. The scheduled release date for the second season is December 25, 2020. Till then stay tuned for other updates.

2020-07-18
Previous Post: Lootcase is the newest delight on Disney Hotstar!! Catch the trailer and everything you need to know
Next Post: Putin’s People: A book worth reading